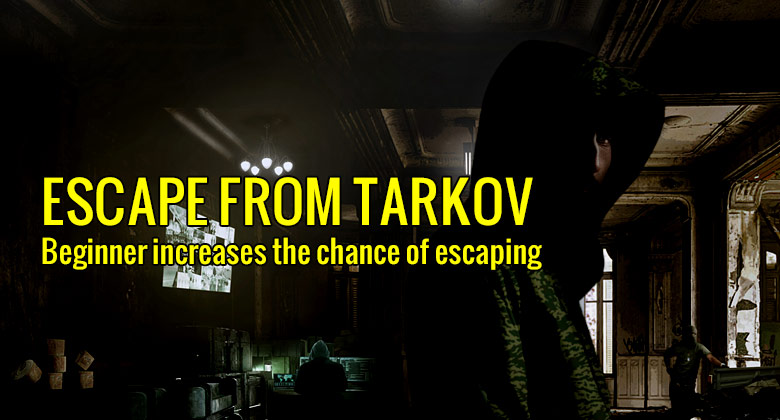 As the name suggests, “knife run” is mainly based on walking to avoid battles, mainly collecting, and this is also the most suitable game for new players. Just like the tutorial for new players in the game, after you learn basic operations, it will take some time to become familiar with the basic gameplay of the game. This period is also the time when new players are most likely to “don’t want to play”. After all, the game elements of Escape from Tarkov are quite hardcore, such as not showing the outline of teammates, death penalty and health system settings have become the reasons why new players “don’t want to play”. The gameplay of “knife run” will allow new players to have a deeper experience of the game at the lowest cost.

Familiar with the map
Familiarity with maps is an essential ability for any FPS game. Not to mention the “evacuation” games like Escape from Tarkov, the familiarity with the map will become the player’s largest auxiliary combat power in the game, whether it is from the choice of the evacuation route or the choice of equipment collection area, “familiar with the map” The ability will bring great help to the player. However, new players must first understand that “knife run” is not simply a purposeless action on the map, but a familiar map practice that focuses on survival and collection.

Gun accessories
After a period of “knife run”, the player has the most basic ability to participate in the battle and also has the qualification to enter the more resource-rich area. The selection and modification of firearms is the player’s greatest reliance in the battle. How to choose the one that suits you and achieves the most cost-effective modification. The settings for firearms in Escape from Tarkov include ergonomic settings in addition to the differences in recoil between traditional FPS games.

Ergonomics in the game will affect the time required for the player to hold the gun and raise the gun, as well as the duration of the gun holding the breath and other factors that can be affected before the gun is fired, and the degree of recoil determines the player’s shooting stability Sex. In general, more players will pay special attention to the modification of the recoil of the firearm. The horizontal recoil in Escape from Tarkov does not reflect much, so it is mainly adapted for the vertical recoil. The choice of new players for firearms in the early stage is mainly cost-effective. For example, the Vepr136 gun is the most common firearm in the game, and it is also very dominant in terms of damage.

The value of Vepr136 lies in its huge magical modification potential, plus its high damage can help players to take into account both AI and full-load players. Most Vepr136 players often choose BP bullets because of their ability to stably penetrate level 4 and with a high probability of breakdown Level 5 equipment. However, the high damage of firearms in FPS games will inevitably lead to huge recoil, and Vepr136 is inevitable. The huge recoil and falling degree make it difficult for new players to adapt. This is why even if Vepr136 is everywhere, not many people are willing to use it.

Vepr136 is a very representative firearm that needs to be modified for recoil. In addition to the use of accessories to adjust recoil, the single-shot shooting method will help players to shoot better. However, if you choose Vepr136 in the early stage, you should try to keep the shooting distance in the medium and short-range. Once the distance is too far, Vepr136’s shortcomings of low accuracy will be exposed. In the early stage, new players do not have too much money to modify the sight. So avoid shooting too far. For the new players in the early stage, EFT money that can be invested in the magic reform is quite limited, and the priority of the modification direction should be distinguished. The modification of firearm damage should be at the highest position, followed by the modification of the recoil of the firearm. As for whether it can be silenced and ergonomically considered, it should be placed on the premise that there is a certain fund base in the medium term.

Detailed preparation
In addition to the familiarity with the map and the familiarity with firearms, in the early stage players should also be familiar with the various game mechanics in Escape from Tarkov to avoid the situation of “pit mining” in the future. For example, “Flea Market” in Escape from Tarkov, in the transaction line in the game, there is a trading option for barter. In order to reduce the high handling fee, many players will choose the transaction method of exchanging things for things, so many new players will often fall into a “pit” situation because they don’t understand the market. One of the most common forms is the exchange of settings that underestimate melee weapons in a systematic manner. For example, exchange dozens of bottles of NRG beverages for melee weapon ice picks, knowing that the market price of beverages is much lower than ice picks. And also pay attention to the small details such as the number of items used. Simply put, none of them appearing in the flea market are savvy. Only familiar with the market and some of the routines can avoid the hard work of the materials they have collected. Water float.

Also in the game, “Escape from Tarkov” also has different settings for the character to wear headphones. The audio recognition in the game is very critical because it is often an encounter, so who can find the opponent first can grasp the initiative of the battlefield. Listening to sound is the most commonly used way to judge whether there are people in the area, and listening to sound can also help players predict the position of the enemy during the battle. Escape from Tarkov has carried out extremely detailed design in this regard. Different headsets in the game will give players different battlefield information. For example, gssh-01 can amplify all sounds, whether it is external sounds or footsteps and floor sounds, the indiscriminate volume amplification still requires players to carefully distinguish the differences in sounds, but the biggest advantage of gssh-01 is that it is the cheap price. For new players who lacked funds in the early stage, it is not necessary to buy gssh-01 with a better mentality.

In the game, the Ops-Core FAST RAC Headset headset needs to be used with a helmet. Although it can also improve the sound, the difference is not big. According to its price-performance ratio, gssh-01 is more suitable for new players. s Choice. As for the two best headphones in the game, Tactical Sport and Sordin. The sound effect of Tactical Sport is moderate. Although the sound of the player stepping on the floor still exists, the moderate volume level makes it easier for players to distinguish the sound. Sordin also has the same Similar results, but the price of the two headphones is also very impressive.

Advanced
When the player has an understanding of the game’s competition process and game preparation stage, it can be regarded as a real “full-load” player. But this process is not easy, especially the most important “familiar with map” ability, often accompanied by constant death. So at this stage players are better to find a reliable organization, seek the help of old players, and spend the new player stage more quickly and efficiently. In addition to being familiar with map capabilities, its ability to assemble and transform firearms takes a long time. It can be expected that as the number of players from Escape from Tarkov increases, more firearms and accessories will be updated, so familiarity with firearms is also Escape from Tarkov is one of the latest intriguing gameplay, and it is also permanent gameplay.