Last week, Mod Mark posted a thread on our forums highlighting some of the nostalgic and often passionate discussions within the community around a desired return of an ‘old school’ version of Runescape Gold. Specifically, the fine vintages of 2006 & 2007 appeared to be the high point of collective interest. Our team then set out to see if we had a backup that went that far back; if restoring the backup was even technically possible; and what specific content these potential old RuneScape backups might contain. 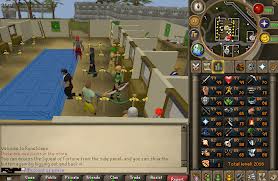 The team has spent many late nights and the past weekend digging through dusty old backups and restoring them, in the hope of finding more than just the old IT manager’s MP3 collection of 80s rock power ballads!

Finally, I’m very happy to report that we have indeed managed to recover a full RS 2007 Gold backup from August 2007. This is a complete snapshot of the game, which we have been able to verify would work, with some time and effort invested in it. Ironically, in October 2007 we actually changed our backup systems, so we have no complete content versions from August onwards that are viable for this purpose.

As I said at the start of the year, we’re all very focused on making this year fun, memorable and special to you, and a significant part of realising this mission is giving you a big say in what we focus on. That said, a huge amount has either changed or been improved since the heady days of 2007. The game has evolved, as have our tech, systems, and infrastructure. There will be a substantial amount of work involved to get these ‘old school’ servers back up and running again. However, if enough people support this project, this will be neither unachievable, nor a hindrance to the main game.