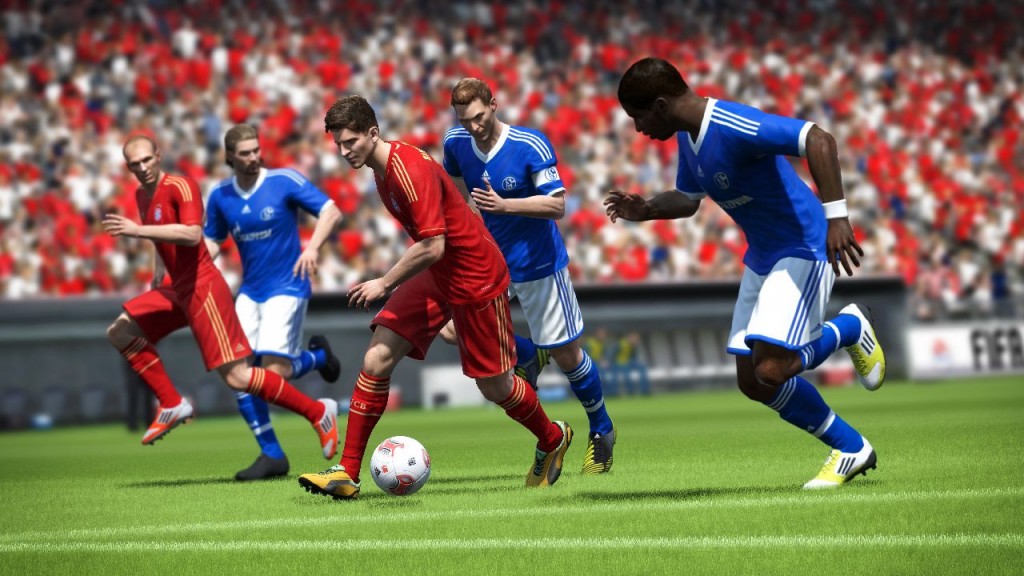 Heading in FIFA15 is much more competitive. With more players now challenging for ball winning the header depends on space timing and how good and strong your player is trying to head the ball. The key is to hold L2/LT when going to win a header and tap shoot. Try to look for players making runs and creating space. Throw in a fake cross and then whip it in.

1). General defensive header tips in FIFA
As mentioned always hold LT/L2 and tap the shoot button when challenging to win a header. Otherwise press pass button when unchallenged and wanting to pass to a team mate. A few rules we use when defensive headers are needed. If one of your back 4 is going for a header from an attempted through ball always try to head the ball to the sides left or right. Not back up field. You will notice lots of headers end up going backwards towards your own goal so this method is more successful. This happens a lot from goal kicks too but is less dangerous if headed backwards.

2).General attacking header tips in FIFA
Similar to the defensive tips but the key thing for gaining power is to flick the left stick and hold it just as the ball hits the players head. Pull left stick away from goal for the header to stay high and towards goal to keep it lower. The timing of this determines the power so practice it lots. Don’t forget hold L2/LT. This also happens to be the acrobatic finish button so depending on height of ball Your player might try a scissor or diving header. They will only do the acrobatic finish if a bit of space and unchallenged.

3).Attacking corners in FIFA
This is firstly about choosing a good corner taker and then the delivery. In FIFA15 you can select the player receiving the ball which we advise using the right stick. Doesn’t matter if your player is in front of the defender or not though obviously a free header is easier to score. For delivery we recommend 1/2 power (middle of goal) or 3/4 power (far post cross) using cross button. As you are adding the power then hold the left stick in the direction you are kicking the ball to keep it lower and faster. Let go of the power button but keep hold of the left stick in that direction until the ball is on its way just approaching the edge of the area. As the player is about to challenge for the header hold L2/LT and flick the left stick towards goal. You can aim it towards any part of the goal so look at where the keeper is.

4.)Defending corners and crosses in FIFA
Almost the same as attacking but as the ball comes in try to position your player in front of the attacker using same method. This means closer to the corner than him not closer to the goal. Then head the ball by pressing shoot button at the time you want to jump in the air and hold left stick either down field or back towards the corner taker.
If you realise you can’t get in front press shoot slightly later and aim your stick so you are attempting to head the other player rather than the ball. As he heads it your challenge should put him off so the ball goes over the bar or in the air. Our video below shows how you can win most headers defending corners and crosses.

5). Look for the arm out in front
This is important as part of the FIFA scripting. Makes sense as humans do it too but sometimes can be a little too scripted. Once the player waiting for the pass puts his arm out in front hold early cross button and cross it! 9/10 times he will then win the header. Early cross button is usually left bumper (L1/LB) unless you changed it. Players crossing are far more acurate when that arm goes out so try using a 1-2 to make it happen too. Player knocks it wide using 1-2 pass and then rushes into box. Very good to use with a midfielder.

6).Positioning your player in FIFA
Mentioned above but just it is important so worth saying on its own. You can position your player holding both triggers (L2+R2 or LT+RT). Helpful throughout the game but especially for heading as without the ball at your feet you can move your player around. Put your player wherever you want to create space and use near post or far post cross. Takes some practice to master this as controlling a player using double trigger isn’t easy unless used to it. As a rule we have change player set to air balls only playing single player or manual selection when multiplayer online

7).Scoring crosses with headers in FIFA
Even if your player is behind the defender this works well. Hold the amount of power on the cross depending if wanting near, middle or deep cross. Roughly 1/4, 1/2 or 3/4 power. Let go of the power button but keep hold of the left stick in that direction until the ball is on its way just approaching the edge of the area. As the ball is coming towards the player do the following early (rather than waiting until ball is near your player). Hold L2/LT and tap shoot holding the left stick towards goal. Don’t be frightened to do this early. Especially because as we know the L2/LT is the button to do an acrobatic finish. You will see your striker leap early through the air to win the ball or try something spectacular.